My little boy turned 5 years old recently. Five! I'm sure every parent can relate to that feeling of disbelief on their children's birthdays. When did they get so big!? How did they get that old!? 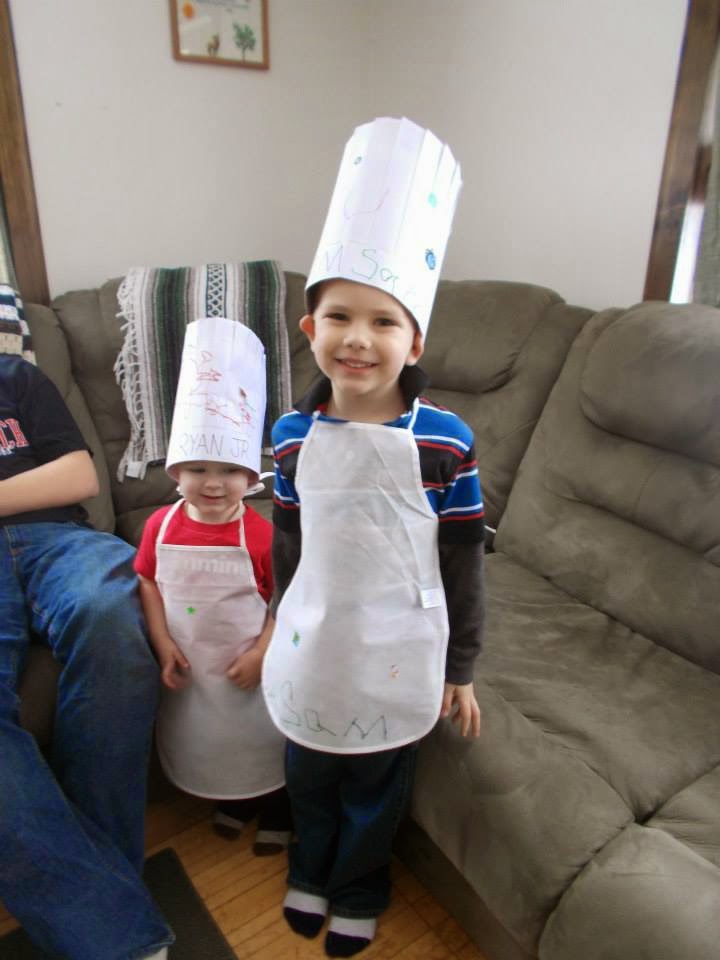 Despite seeing my Sam grow up too darn fast, I love themes so throwing a kids party is a lot of fun for me. This year Sam decided he wanted a chef themed party. Actually, at first he wanted a Cutthroat Kitchen birthday party, but I figured that having a large group of five year olds cooking at my house was enough of a sabotage, so we simplified it to just a chef party. (Though a more involved Cutthroat Kitchen, Chopped, or Iron Chef party would be pretty fun for a group of teenagers or adults!) 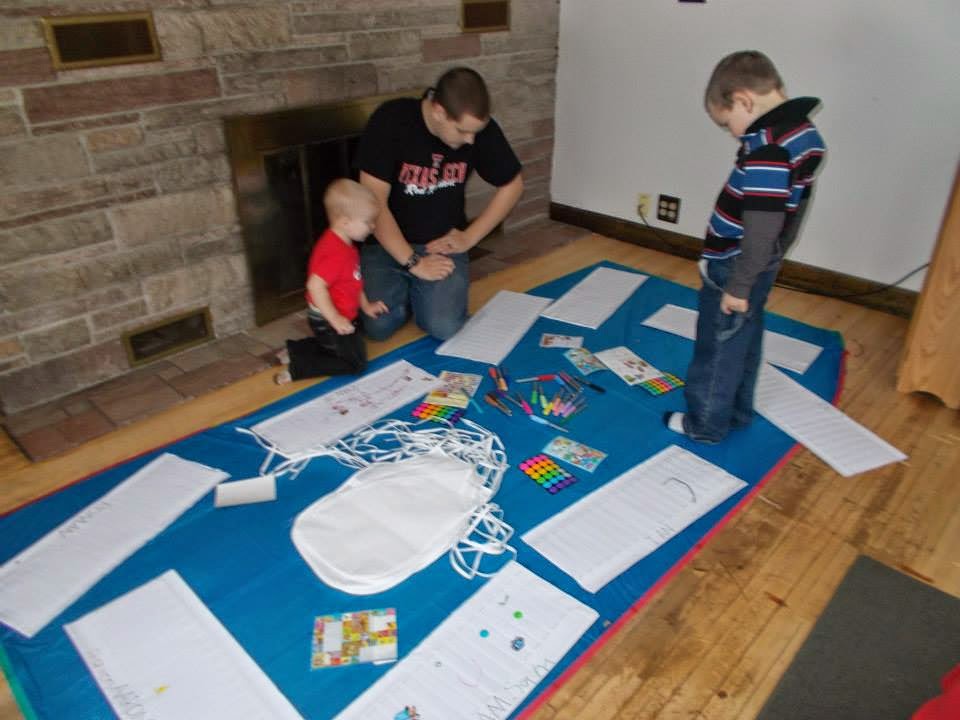 The nice thing about a cooking party is the food is the entertainment, so you don't have to come up with a bunch of games for them to play. I ordered some plain chef hats and aprons from Oriental Trading Company for them to decorate. I like to have something for the kids to do while we wait for all the guests to arrive, and not only did this activity give them protection for clothing while we cooked, but they got to take them home as their party favor as well. The hats and aprons cost less than two dollars per kid.

I used electrical tape to secure a plastic table cloth to our floor as the decorating space. Electrical tape is what we use at the dance studio to mark off a stage area for summer camp, so I knew it would come off easily after the party. 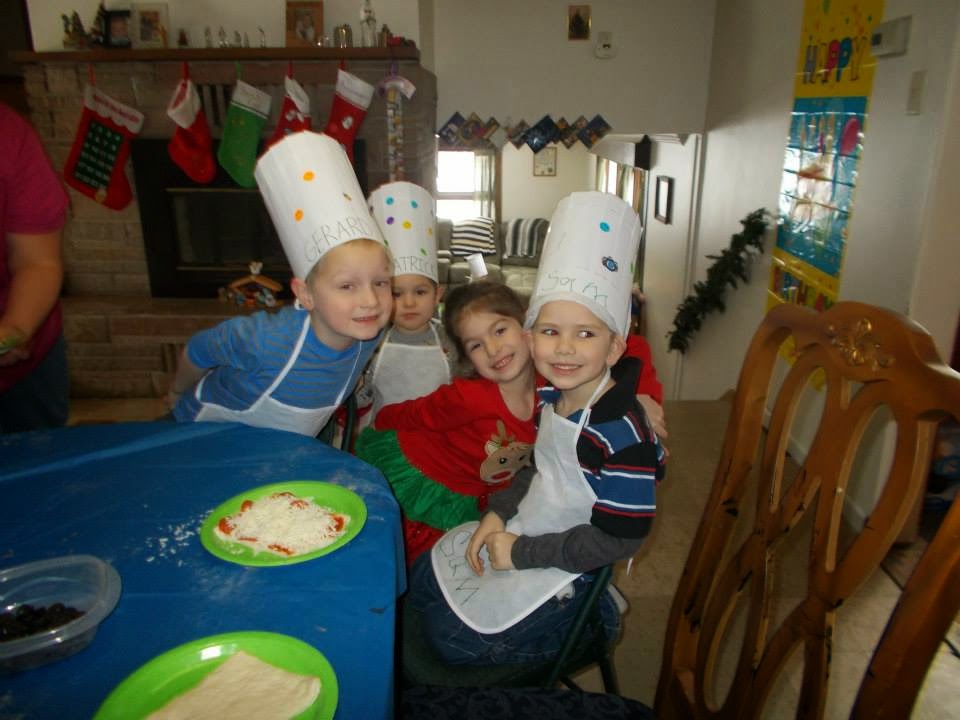 Next we moved to the kitchen to mix up some cupcakes. Note how I covered the table with a plastic table cloth so any messes would be easy to clean up. We did the cupcakes first, so they would have time to cool before we decorated them. Hot cupcakes = melted frosting! For this age group I pre-measured all the ingredients in small containers and had them take turns adding them to the bowl and stirring. Then I put the batter in the muffin tins and put them in the oven.

Next we moved on to making our pizzas! I bought pre-made pizza dough and gave each child a piece. I set out containers of sauce, cheese, and a variety of pizza toppings and let them go for it. When they were done we put them in the oven and did presents while they cooked.  I didn't label the pizzas with which one was who's, but they were all different, so it worked out!

I'm pretty proud of my present to Sam. I've been meaning to learn how to sew for quite some time, and I've finally done it! The apron he got for his birthday is the first sewing project I've done all by myself. While it's not perfect, I think it turned out great! It's a little big, but he'll be able to use it for a long time. 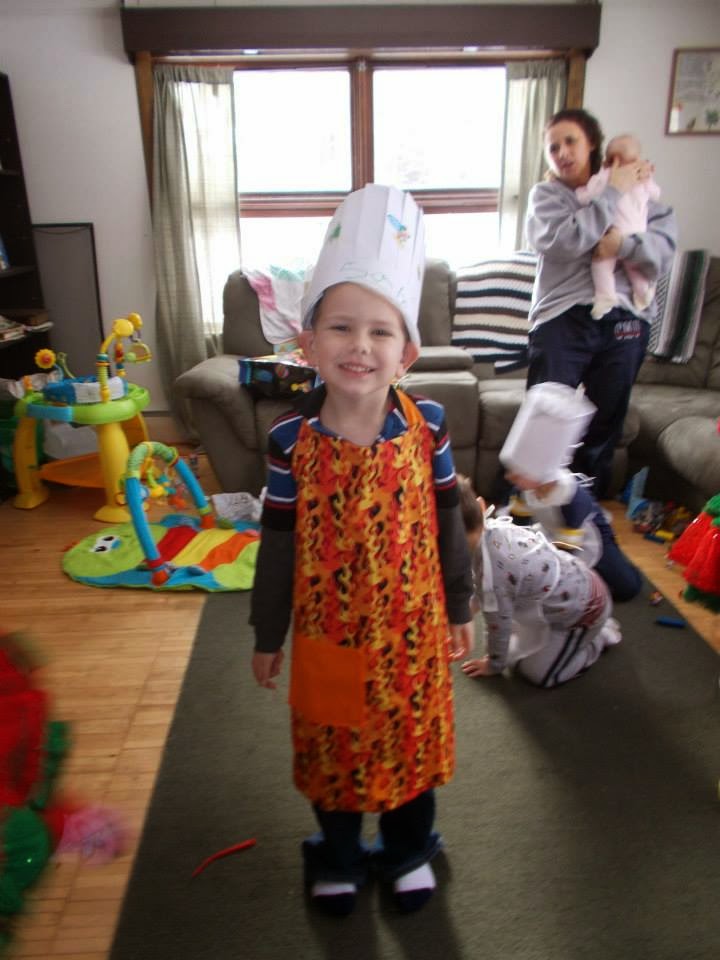 After presents we returned to the kitchen to eat our pizzas, and decorate and eat the cupcakes. I put out a few tubs of frosting in different colors with butter knives for spreading, along with fun toppings like sprinkles, gumdrops, M & Ms, and chocolate chips. I didn't actually buy any candy either, I mostly used leftovers from Christmas!

All in all, I think the kids had a lot of fun. I know Sam did, he's asked for another chef party next year! We'll see if he changes his mind in the next 12 months.

Since in a cooking party, timing is important, here is a breakdown of the order of events. The party lasted 2 hours. At this age any gaps in planned activities were filled in by them simply playing with each other. We got everything done with time to spare.

Sunday was Ephiphany, or Three Kings Day, the part of the Christmas season when we celebrate the three kings, (or magi, or wise men), visiting the baby Jesus and bringing him gifts of gold, frankincense and myrrh.  Epiphany is traditionally celebrated on January 6th, but here in the U.S. it gets moved to the Sunday closest to the the 6th.

In Mexico, this is the traditional day to exchange gifts, rather than Christmas day, which makes sense since it is the day Jesus received his gifts! It is also a tradition to make three kings cake, which usually has a prize hidden inside. Whoever gets the prize in their piece of cake is supposed to host a party on Candlemas, the Feast of the Presentation of the Lord, and provide the tamales and atole! Candlemas is on February 2nd. My great aunt on my Mexican side, whom we simply refer to as "Tia," (aunt in Spanish), gave me this recipe for three kings cake - rosca de reyes. It is less like a traditional American cake and more like a sweet egg-y bread which is filled with fruit, similar to the German stollen or the Italian panettone. 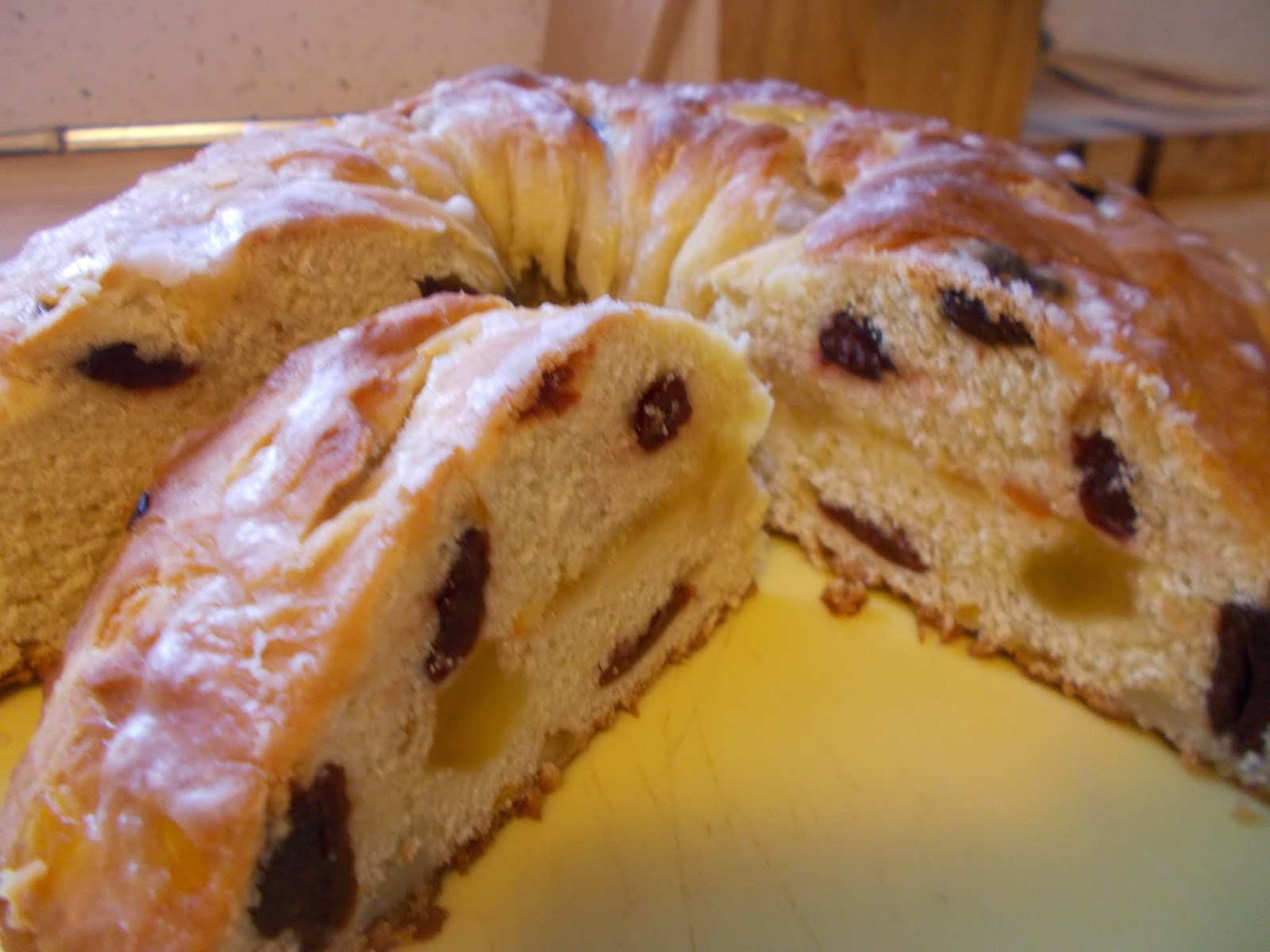 The original recipe called for preserved fruit that you typically find in fruit cake; candied cherries, diced orange peel and citron. I tried using the citron once and wasn't too pleased, so I replaced it with diced dried pineapple this time. I also decided to replace the candied cherries with dried cherries - also much tastier. Of course I'm sure you could add in any dried fruit that you would like! 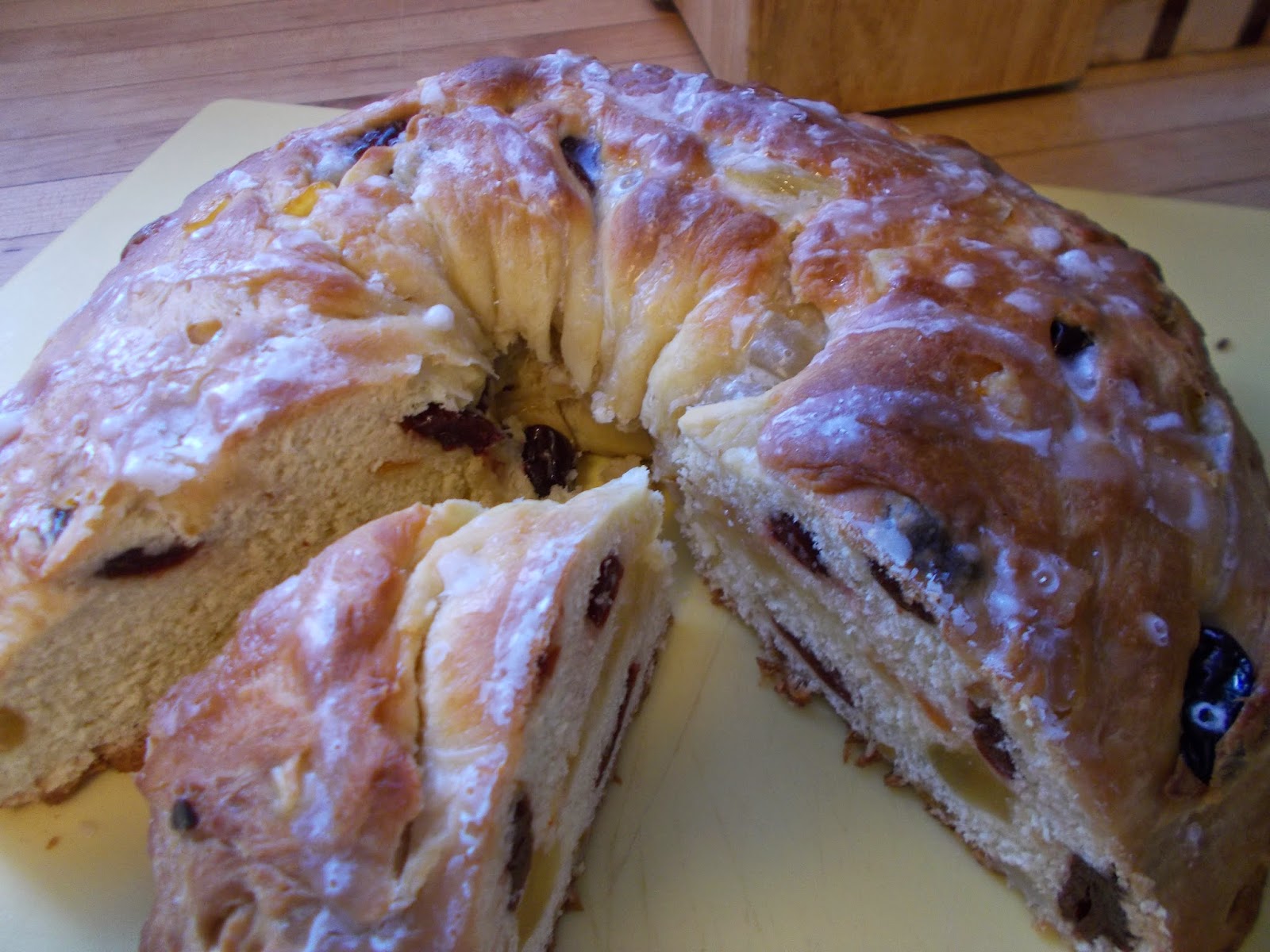 Stir the yeast and lukewarm water together -set aside.

Mix together the salt, sugar, eggs and butter. Add the yeast mixture.

Add in the flour and mix thoroughly. Knead at least 6 minutes. Place in a lightly greased bowl, cover with a damp cloth, and let rise for at least 1 hour.

Dust the dough with flour and mix the fruit the fruit into the dough. This is best done by hand.

Place on an ungreased baking sheet and form a ring. Add a porcelain prize or coin wrapped in wax paper. Let rise for 30 minutes.

Drizzle a mixture of powdered sugar and cream over the cake while it is still warm. 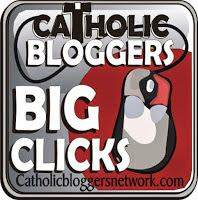